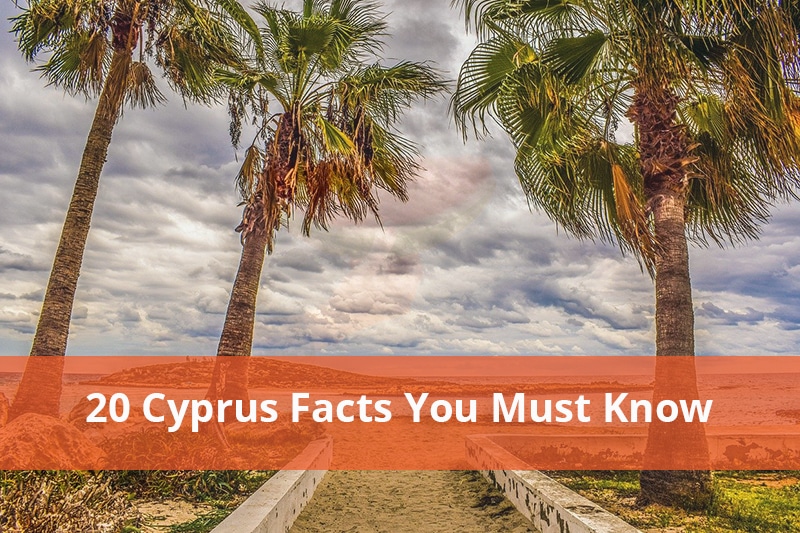 Sicily and Sardinia may have beat it in size, but Cyprus as the third largest island in the Mediterranean has been settled for over 10 millennia. It is no wonder that the island is rich with history and culture. Property Experts Cyprus dives deep into the fascinating ways this island country has impacted the world. Enjoy these 20 Cyprus facts, which you absolutely have to know.

20 Exciting Cyprus Facts You Need to Know About

There are so many unique Cyprus facts to discover and only a visit to this turquoise blue paradise will really do it justice. In the meantime, explore beaches to ruins, cheeses to cats, and all the other wonders of Cyprus with these interesting facts about Cyrus.

There’s a lot to love about Cyprus, so much so that Cypriot legend maintains that Aphrodite (also known as the Roman goddess Venus), the Greek goddess of love, was born on the island. Since then, the island has been known as the place to play for the Greek gods.

Wine is a big deal in Cyprus and the Cyprus Wine Museum allows visitors to explore the site where archaeologists unearthed evidence that Cyprus winemaking began 5500 years ago in the museum’s exact location.

Furthermore, Commandaria is the Cypriot dessert wine acclaimed for being the world’s oldest named wine. Debate continues on whether this wine was named by Knight crusaders in the 13th century or made for 5,000 years.

The coastline is 648 kilometers long, surrounding Cyprus with a Mediterranean seafront. Within its coastline though, you can find the world’s oldest water wells near the town of Paphos.

Nicosia is the capital of Cyprus with a population of over 200,000. In 1974, Greek nationals wished to unite Cyprus with Greece as one nation and Turkish troops came into the city of Nicosia claimed the northern part of Nicosia during an attempt to intervene.

Today, there is a UN buffer zone that divides the city, with northern Turkish Cypriots and southern Greek Cypriots living peacefully. It is the only capital in the world to be divided into two. Residents can cross over “the green line” easily to visit restaurants and shops on either side with a passport and any necessary visas.

Already, many people today are finding out what makes Cyprus such a wonderful destination in which to relocate or retire. Yet, people aren’t the only inhabitants of this natural oasis. Green turtles and loggerhead turtles choose Cyprus as one of the few places globally to nest along with over 1 million people.

Through our list of Cyprus facts this far, we have learned about the divided capital of Nicosia with both Turkish Cypriots and Greek Cypriots. Both Turkish and Greek are the official languages of Cyprus. 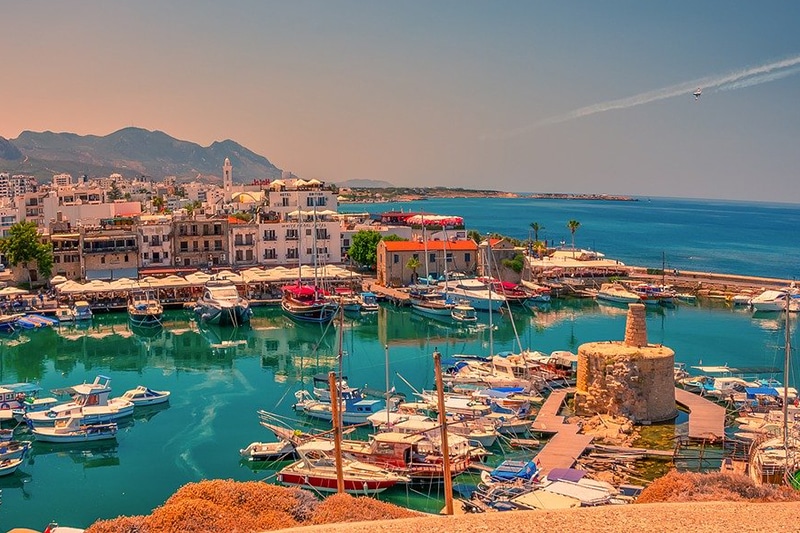 And both languages have Cypriot versions that are similar to their historical backgrounds. For example, the Greek, which is spoken in Cyprus, is a dialect of the Greek language.

Did you know that during the Copper and Bronze Ages, Cyprus was known as one of the wealthiest countries in the world? This golden age may have passed since. However, with various exciting new foreign investment projects and manyfold business opportunities, this island is once again wealthy with a diverse mix of financial growth, relaxed lifestyle, health benefits, and cultural wonders.

In 2004, the remains of a person buried with a cat were unearthed by archaeologists from a 9,500-year-old grave in Shillourokambos, a Neolithic village east of Limassol. This may very well be the oldest pet cat in the world. We give this Cyprus fact four paws up!

Archaeologists have been kept busy with 10,000 years’ worth of human civilization to comb through in Cyprus. Among the oldest wine, water wells, and pet cats, it is also home to the world’s oldest perfume bottle. Dating back 4,000 years ago, the bottle contains pine, anise, coriander, bergamot, and parsley extracts.

Located between Asia, Africa, and Europe, Cyprus has long been an important trading center, which could explain the perfume bottle.

In 2019, 65 beaches in Cyprus were awarded Blue Flag certification, making them some of the cleanest, family-friendly beaches in the world. Paphos, Limassol, and Famagusta demonstrated excellence in environmental education and management as well as water quality and safety. Blue Flag beaches are also known for having some of the highest quality of services to visitors.

In Lefkara Village, a short distance from Larnaca, Cypriot handicrafts infuse history and culture into a wide variety of handmade lace, jewelry, pottery, and silverwork. The local handicrafts were so well made that it is said Leonardo Da Vinci came to the village in 1481 to acquire lace for the main altar of Italian Duomo di Milano. Visitors to the village can still purchase these Cypriot goods alongside many other quality products.

It may be one of the most exclusive destinations right now for investment and development, including a trove of tourism with its balmy beaches and upbeat nightlife, but Ayia Napa was once an uninhabited woodland years ago. Only hunters would stray in from nearby villages. Today, it is a mecca of urban and outdoor life.

Cyprus receives just 40 days of rainfall annually. 300 days are filled with sunshine and beautiful weather. Residents can enjoy strolls through the cities or adventures through mountains and national parks any day of the week. The weather is one of the reasons Cypriot residents tend to live 75 years or more and retire in much better health than in other parts of Europe.

On the 12th of May, 1191, King Richard and Queen Joanna were married at Limassol Castle. To date, this is the only foreign venue to host an English Royal Wedding.

Also on the list of Cyprus facts is that the whole city of Paphos is considered a UNESCO world heritage site. The Sanctuary of Aphrodite, Tombs of the Kings, and the remains of villas, palaces, and theatres are all part of Paphos history. The mosaics found in Paphos are some of the most stunning in the world. 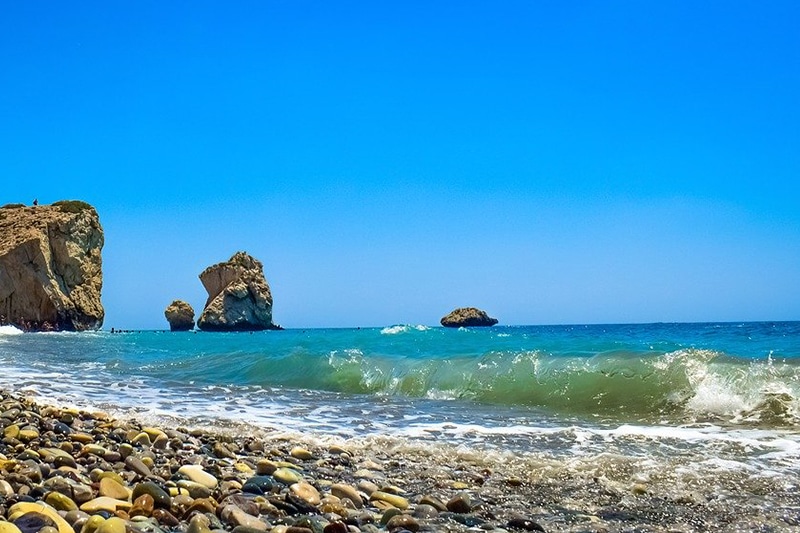 Paphos isn’t the only place in Cyprus to make the UNESCO list; the Painted Churches in the Troodos Mountains are also historical landmarks depicting life in 10 Byzantine monasteries and churches.

Of course, there is plenty of wildlife in the waters surrounding this island country, but Cypriots aren’t big on eating fish or partaking in fishing trips. Most of the food is meat-based and residents prefer enjoying water sports and other water activities.

More than 20 rare orchid species are found in Cyprus and with its balmy, sunny climate, over 1950 flowering plant species can be found on the island. 140 of these flowering plants are exclusive to Cyprus.

Cyprus also boasts the mouflon, a long spiral-horned mammal, as well as flamingos, which flock to the salt lake from November to March. There are also 380 species of birds that take their migration route through Cyprus between Africa, Europe, and western Asia.

Halloumi cheese is served in a variety of ways all over the island. Many Cypriot families make the cheese from a special blend of goat and cow milk. This combination creates a mild cheese that doesn’t melt. Just perfect for the hot Cyprus weather.

Did you know that the EU and the United States recognized this form of cheese as purely Cypriot? In order to be called halloumi cheese, it must be produced in the country.

Off the coast of Larnaca, Zenobia lies shipwrecked at the bottom of the sea. This cargo ship is still largely intact despite sinking in the 1980s. This shipwreck is considered one of the top 10 wreck dive sites in the world and now divers can see carpets and vending machines alongside tuna and barracuda. The Cypriot underwater world is waiting for you!

There are only two nations in the entire world to put the map of their country on their national flag, Cyprus and Kosovo. Cyprus was the first to do so. Designed in 1960, the flag depicts Cyprus in the center with two olive branches below it.

Told in legends, St. Helena sent an entire ship of cats to the island to rid it of poisonous snakes. Today, with over 1.5 million cats, Cyprus has more felines than humans residing on the island.

The Takeaway: Cyprus Facts you need to know

Cyprus is a destination with so much to discover. From ancient ruins and daily lifestyle items from long ago to natural wonders and handmade products, this island nation is rich in adventure. Every day, there are new Cyprus facts to revel in while enjoying some Cypriot wine and halloumi.

Property Experts Cyprus can get you set up in the right Cyprus location and on the way to the lifestyle adventure, you crave most. Contact us about scheduling your visit or preparing the necessary paperwork for residency opportunities in Cyprus. 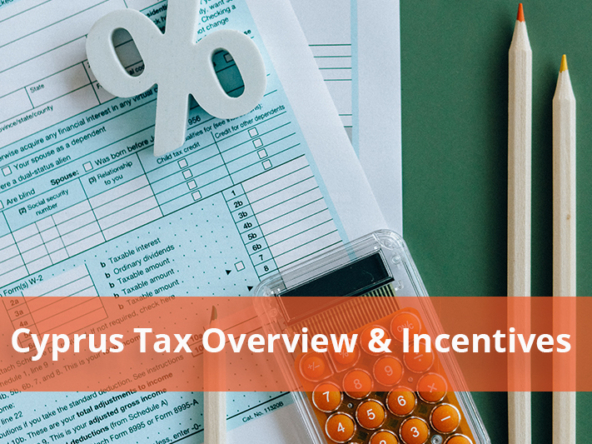 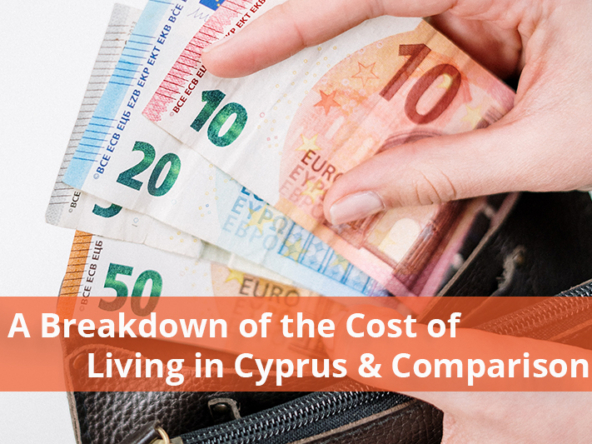 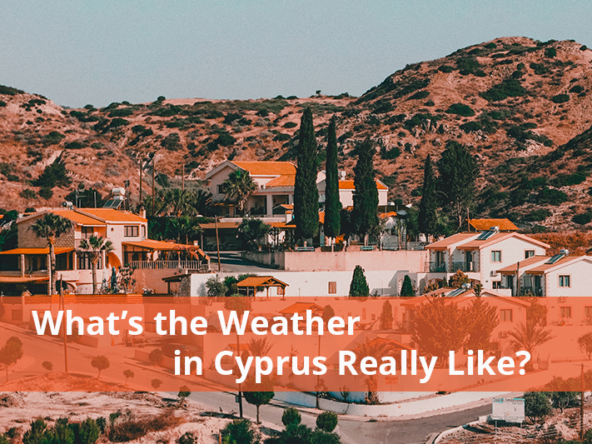